What Happens When Your Expectations Are Already Low?

Last week, I wrote about dealing with disappointment. And I did end up lowering expectations based on a pattern. But I'm at a point now where I lower the expectations anymore, there won't be any friendship with this person.

We both have repeatedly messed up, but consistently, I am left feeling neglected by this person.

First, I am going to speak in his defense based on repeated conversations. Yes, he is married and although I would not technically call his wife a friend right now, I can relate to her and if she chose to be a friend with me, I am definitely all for that. But because of technicalities that existed before, this was something that would have been a guarded area. So I honestly don't know how to define her right now.

As to friendship with him, based on countless conversations, neither of us are worried about anything inappropriate coming up. Matter of fact, I think that may be the advantage of autism.

But to some people, they think he is in the wrong. Because of the autism.

I am actually defending him right now. Nothing has happened not will anything happen. I trust him better than I would trust my biological father. So by comparison on that fact alone, I know I don't need to worry about him.

However, as to the friendship, I have felt neglected. He does always SEEM to be distracted when he talks with me on the phone or I feel like I'm just an afterthought. Maybe he doesn't mean to do this, but I just don't know anymore.

His "every other day" boundary is simply not working very well at all. There are days that are supposed to be my days on which he is apparently TOO busy to even bother to take two minutes to talk.

The other day, he commented how it seems I never feel like we're done talking and therefore cannot seem to end the conversation without feeling like I have something else to say. But wouldn't you if every time you talked with someone, you never really got to actually finish a conversation because the other person was so distracted?

He's about to be gone for a week. I want to respect and honor him during that time, but if I already feel neglected because yet again on one of MY days, he's TOO busy for me, how can I trust that anything can be settled before he leaves? I had something I needed to give him before he leaves and it appears as if that will definitely not happen.

However, I know he can "hear" me better when I communicate in the way I communicate best: my writing. So that's why I am writing this.

And let me just say that where things stand now, the threat of losing him as a friend seems even greater now than ever before. And I'm SCARED.

So now what? Remember that extra TLC I mentioned needing last week? Yeah. I could use that.

Oh, and if he is reading this, I'm sorry and will you forgive me? 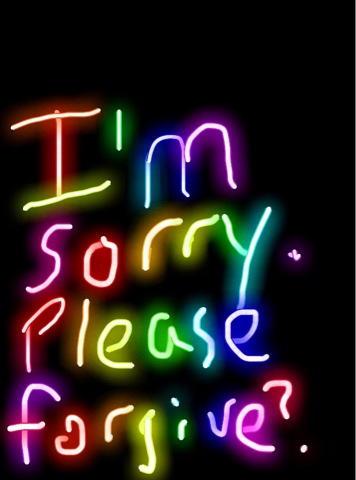