There's this angel I see a lot. Well, not exactly, but she's so bright and so fast that I couldn't describe her very well if you asked me. But her name is Gertie. She takes care of babies and sick people. There are a lot of angels who do that, but Gertie is special. Her people that she helps tend to be special as well. Gertie visited me briefly today and told me to paint her as best as I can so a special family can have the privilege of seeing her as well. Gertie flew down to Florida today as soon as she heard my friend, Tom's granddaughter might need her. Gertie said I was going to be okay and that things would get worked out with Tom an other stuff. She said I didn't need her so much right now, so she had to go be with the baby Winnie. But she said to paint her as best as I could so they can see her later as well. I don't know why this angel visits me so much or why she came today, but I'm honored to get to be the one that paints her for that family. Gertie will be with that baby until she arrives in this world. And even for a little after. Because that's what she does. 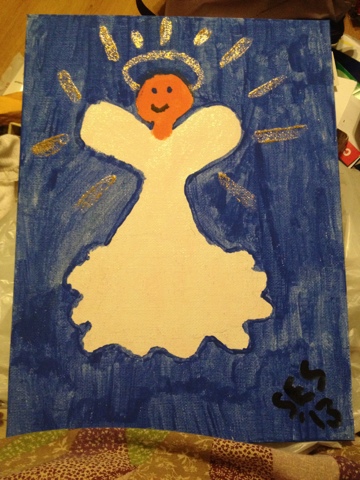